There is danger in familiarity. This morning at church, the pastor taught from Mark 14. I suppose millions of people worldwide know the story of Mary, the sister of Martha and Lazarus, who anointe 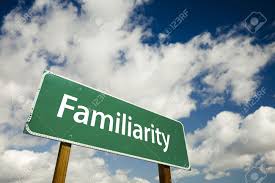 d Jesus with her flask of oil. And Jesus paid her one of the highest compliments possible: “She has done what she could; she has anointed my body beforehand for burial. And truly, I say to you, wherever the gospel is proclaimed in the whole world, what she has done will be told in memory of her” (Mk 14:8-9 ESV). The pastor reminded us of several things. One precept, in particular, abides with me: Mary did all she could. And this convicted me about how superficially I can treat others, especially those with whom I’m familiar.

There is danger in familiarity. And nothing quite rouses me from the slumber of familiarity like the reality of death. Let me explain.

This morning in the Sunday school hour, the pastor stopped by the class I teach. He shared with our class that one of the elderly ladies in the church family had died in the early hours of that very morning. And as soon as he said her name, her face appeared in my mind’s eye.

We all have certain facial expressions, or nuances of demeanor, that mark us as unique. And this lady’s ways became almost palpable to me. But I grew more and more convicted. Why? Because I’d not spent quality time in conversation with her the last time I’d seen her at church. I was too familiar with our standard “meet and greet” time. Of course, I shook hands, and hugged, and engaged in small talk with some folks. But had I known that I’d not have another chance in this life to speak with this lady, I would have done things differently.

That is part of the danger of familiarity, at least for me. I grow accustomed. I develop a routine. The routine becomes superficial. I can atrophy as a human being. I don’t attend to my neighbor. Instead, I take her for granted. This is a danger of familiarity. We are easily habituated to feigned courtesy. Until death shakes us from our torpor.

As the church service progressed through its order, we sang and prayed and sang again. And then there was the “meet and greet” time that I have sometimes dreaded. (Like my grandfather, I’ve never excelled at small talk, so I can be ungainly at times, at least with this sort of thing.) But this morning was different. No, I didn’t suddenly become gregarious and go around backslapping and talking of the day’s news headlines. Instead, I stayed in my pew, and spoke at length with a dear couple in front of me. They talked of their many years living in southern California. The husband spoke of being a firefighter in San Diego. The wife spoke of her childhood in Colorado. They spoke of their children. I could see their eyes sparkle as they reminisced about certain events in their past. Why is all of this important? Because rather than going through the motions of caring, I did care. And they cared. We talked. We listened. We fellowshipped. I learned from listening to them, and by having watched their lives for years, that they know what it means to give all.

Like Mary, who anointed the Lord with her costly perfume, these saints in front of me have taught me (whether they know it or not) what it means to give all, to invest eternally. And so much of that investment comes, not by way of the extraordinary, but by way of the ordinary, by the familiar feel of another’s handshake, through the recurring scent of a woman’s favorite perfume, or the grin of an older wiser man, who says much in few words.

For Mary, the sister of Martha and Lazarus, she never became so accustomed to the Lord Jesus that she atrophied spiritually. She gave all. And now she’s remembered.

There is a danger in the familiar. And I think it’s failing to appreciate beauty that surrounds us. God’s providence is displayed, not just in the beautiful sunset or poem, but also in the saints on the pew in front of us.

“There is nothing I would not do for those who are really my friends. I have no notion of loving people by halves,” Jane Austen wrote. There is a paradox in today’s culture—namely, while we are more connected than ever via social media, we are often lonely for true friends

The spiritual connections that come through true friendship are worth more than thousands of “virtual” friends.

Like you I’m “friends” with people on social media that I rarely if ever spend quality time with. No, not the friends who live hundreds or thousands of miles away, that’s understandable. I refer to people that would be more accurately defined as acquaintances or peers.

But social media alone, if divorced from deep relationships, cannot satiate the hungers met in true friendships. They cannot satisfy the spiritual hunger that’s implanted in us.

I have taught literature and/or composition for much of the last 15 years, in addition to serving in the military. A recurring theme I witness when I observe my students each term is the longing they all have for meaningful connections and true friendships. Some of them share details of themselves online that they’d be loath to share in otherwise public ways. Why is that? I think it’s often this void, this friendlessness void, they’re attempting to fill.

Might we take the time to invest in our relationships and cultivate friendships? Resilience, a concept we strive to cultivate in the military, is no less important in our civilian lives. The practice of bouncing back and recovering is immeasurably more likely when built upon a foundation of friends:

“Two are better than one, because they have a good reward for their toil. For if they fall, one will lift up his fellow. But woe to him who is alone when he falls and has not another to lift him up!” (Ecclesiastes 4:9-10 ESV).