Morning. About 8:30. We were in my truck. I was driving. My son was in the front seat beside me. No one else was with us. I drove slowly—very slowly—because of the fog. Thick and dense fail to describe sufficiently that fog. I don’t remember fog that formidable before. The irony is that it was in the fog I saw something clearly. The fog had not just descended upon us; it had taken over. We were its captives. Follow me.

My son was on his phone. He was streaming YouTube videos of piano riffs he likes. After he watched one several times, he said, “Dad, look at this,” and brought his phone towards me. “Goob, I can’t right now. I’m driving.” And he watched the video again and narrated what he thought of as the highlights.

I had spent the week before that morning reading the novel White Noise by American literary fiction writer Don Delillo. It was my first time reading this novel despite its reputation as one of the most influential books of the 20th century. Underworld and Libra are probably the other two of Delillo’s novels that have earned the most critical attention.

Technology affords countless luxuries, for sure. Obviously, I use the internet like millions of others do. However, I am not alone in thinking that we have forfeited something in that exchange. Because we can use the search engine of our choice, if we have a question or just want to get lost in entertainment, we can browse for it online. No matter how inane, insipid, vile, etc. we can find it. There is no end to the distractions. If distraction is your aim, the internet is your weapon.

But there are a few of us who engage in an antiquated means of understanding the world: we read. As some nowadays quip, it’s the old-school way. You know, books. Actual bindings with stories of boys like Tom Sawyer and Huckleberry Finn; women like Elizabeth Bennet and Tess and Lady Macbeth; killers like Raskolnikov and Anton Chigurh.

But now we have YouTube and countless other means of distracting ourselves, and we can use these to such a degree that we lose the ability to see, to think, to use our imaginations, to dwell upon the deep things of life that enrich us by way of reading.

I am not blind to the irony: I am using the internet to partly write about the dangers of the internet. But my goal is not to be legalistic here, only to suggest that if we as a culture forego and forsake reading deeply–if we think that surfing the Web is learning, we have lost a lot. Which brings me back around to the fog.

As my son and I descended from our house onto a state highway, the fog had not thinned at all. We could see only a few feet beyond my front bumper. It was so captivating, my son even remarked, “Dad, I need to take a picture of this.” And he did. He used the same phone he was using to formerly watch YouTube videos of piano riffs. But he had noticed something out there—something that he and I were experiencing together that didn’t involve the internet or a video. We were seeing life unfiltered. We were descending the mountain; we were bathed in fog; it was ghostly and ethereal; it was like, well, something from a book. It was like what Delillo was aiming at in White Noise. 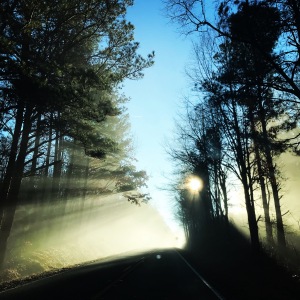 It was a moment where I realized that sometimes the most meaningful moments of our lives are not dependent upon the Web. This one came as I drove slowly in the morning fog, a novel about the costs of distraction and the emptiness and shallowness of contemporary life in the back of my mind. My headlights were two white lances laboring to slash through the fog. But my boy noticed. He noticed. He saw the beauty, felt the mystery, lived for a few moments without the artifice of a video.

And yes, he took a picture. But it does not do that morning justice. I guess, in other words, you had to be there. It was so good, so important–well, it was like something you experience in a book. Because of the fog, I saw clearly what I think Delillo explores in White Noise. Because of the fog, my son and I both focused on the strangeness and mystery that fog engenders. Because of the fog, I saw my boy look up and out at the world and our place in it, instead of down at his phone. And I was glad that I had to drive slowly. I was thankful to be there. I was thankful that simple things like foggy mornings, driving through the hills, seeing a boy’s eyes register that this was not just a video to stream but a real moment to live—yes, it was like the beginning of a good story, when there’s fog, mystery, but then clarity. 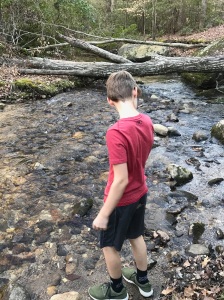 “Watch for the moss on those rocks. It’s deceptive. Slick, son. Please be careful.”

I watched my 10-year-old descend to the fast-moving creek below. Gray granite stones, many times bigger than we were, jutted from the north Georgia hills, some at incredible angles. Often they had carpets of green moss on them, especially if they received little direct sunlight or were near the water.

From twenty feet above I watched my son. With one foot on the rocky bank, he leapt onto stones that protruded from the creek bottom. At last he was on the other side of the creek from me, looking up at me. He had his hunting knife in its sheath in his right hand. He held it up, pointing it skyward, as if to say, “Dad, see. I didn’t drop it.”

It wasn’t freezing, of course. My son, after all, was wearing a t-shirt, shorts, and tennis shoes. And I was in shorts and hiking shoes, with only a t-shirt and my favorite cap on. It was probably fifty degrees outside, but when I did climb down and meet him in the creek, we dipped our hands in the cold north Georgia water. We felt the water together. The afternoon sun struck the creek, and reflections from quartz, mica, and shale flashed from the waves. The stones, though silent, spoke.

Once down, there was only one thing to do, and that was go up the other side. I waited to see if my boy wanted to lead. The other side was just as steep. Slowly I began scaling my way up by way of stones and by pulling on the laurel limbs that surrounded us.

My son found his own way up, too. When we both arrived at the ridge where we could see down to the creek again, we paused, caught our breath, and felt the presence. Of what exactly?

It was really just a walk through the woods within a mile of our house—woods that are filled with whitetail deer, black bears, coyotes, hawks, and more squirrels than one can count. But we did not see them this day. For my son, he saw time with his dad, climbing massive stones up and down on a sunny March afternoon, and descending steep creek banks to play in the creek. I felt analogous things, too, but also perhaps some things about time, some things about how beauty is not a cosmetic we purchase. I understood something about beauty being inseparable from God, about beauty calling one to praise him for his benedictions.

“I’m right behind you,” I said. That’s what I told my wife and son as they departed the hotel. They had been gone an hour or so and I had only a few remaining administrative tasks to accomplish. Then I would be headed home.

I was wrapping up another Strong Bonds for soldiers and families at an Atlanta-area hotel. The program is designed to aid soldiers in communication skills, in understanding trust and mistrust issues, in working through conflict, in fighting for our marriages, in knowing our own “love languages” and the languages of those to whom we are closest, in how we soldiers—married or single—might make wiser decisions regarding how to show love and sustain love.

All I had remaining, I told myself, were just these final signatures with my hotel contacts, accountability for personnel, double-checking my room for gear, and I could go. I was tired, and longed for my own bed. Long day tomorrow (Monday). Always, I thought, looking ahead.

I’d confirmed all of the soldiers and families who had participated in the three-day event had checked out of the hotel. Most had repacked their cars or trucks for the drive back to their homes. As each event finished, I liked to watch couples leave together. Often they held hands walking out from the hotel through the parking lot, their children pulling at the parents’ pants, asking, “Can we stop for lunch?” or “What are we going to do now?” Unmarried soldiers walked with their battle buddies and talked of common interests, or their evaluations of the training event. Single parents often wore expressions of enduring resolve amidst unspoken solitude.

I finished the paperwork with the hotel staff, double-checked I had all my gear, zipped up my backpack and computer bag, and headed out the door. A twenty year-old bellhop said, “Have a good day, sir” as I exited the vestibule and crossed through the closest parking areas down to the lower lot where I had parked my truck.

I placed my gear in the bed of the truck and got in the cab. I cranked the truck, let the windows down for the accumulated August heat to escape, and turned on the A/C. I sat for a moment taking mental inventory, thinking of anything I might have left behind.

When the cab was cool, I backed out and drove towards the exit gate. When I approached the area to scan my room key, I did. The red and white arm lifted. I dropped my key into the drop box and prepared to turn out of the parking lot onto the main road but as I watched the gate’s arm descend in my rear view mirror, a couple caught my eye. It was not a married couple. It was a father and son. The father was one of our instructors and chaplains. He was walking back to the hotel lobby. I stopped my truck and rolled down the window.

“Is everything okay?” I asked.

“Matthew wanted to go walk through the hotel again. He likes it,” the father said.

Suddenly my thoughts flashed to my own 10-year-old son, and of what it means to walk beside.

I watched them walk on beside each other looking ahead together.