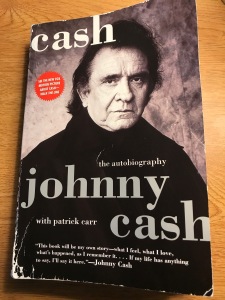 Over the last few days, I completed reading Johnny Cash’s autobiography cash (ibid.) and I respect him and his music even more now than I did before. It has to do with his determination to follow his vocation with simple (not simplistic) truthfulness.

Vocation—(n.) a summons or strong inclination to a particular state or course of action

I remember sitting down with a professor when my family and I moved for me to attend seminary several years back. We met with a scholar from the church history department. My wife and I went into the professor’s office and exchanged pleasantries for a bit. He asked me which writers and thinkers most influenced me. Then he asked me to describe my vocation. It was then I discovered his aim. It was for me to understand what I really valued. By whom and to what was I called?

I relearned through that conversation years ago something I again appreciated in Cash’s autobiography. It is this idea of vocation.

This idea of vocation/calling shapes Cash’s music. He is not glamorous. He is not flashy. He is not adorned. He is simply (not simplistically) “the man in black” with his black Martin guitar, his black boots, his deep Arkansas-Tennessee voice, his simple lyrics about love, loss, self-destruction, rescue, redemption, Jesus’ work on behalf of sinners, marriage, forgiveness, restoration—all with ever-present focus.

His country music attests to his worldview. It bears witness to his efforts to answer and follow his vocation.

There were dark times, of course. He battled amphetamine and opioid addiction. He battled the bottle. He battled lust. He was not a perfect husband or father. But he pressed on; he followed his vocation. He did not sell out to style over substance.

When he saw that much of so-called country music had degenerated to donning a cowboy hat, wearing tight jeans, boots, and speaking with a southern accent … well, he stayed true to what he knew—the old gospel tunes, Hank Williams Sr.’s tunes, the Carter Family mountain music, Bill Monroe, and the other pioneers.

He kept to the timeless truths he had learned the hard way … from growing up poor in the South, picking cotton, listening to the panthers screaming at night in Arkansas and to the whistle of the trains as they cut through the farmlands.

He stayed close to his heart for telling the truth musically. He fought to maintain his allegiance to his vocation. Towards the end of his autobiography, Cash writes about his awareness of his own mortality:

Not that I believe you have to “grow old gracefully.” I go along with Edna St. Vincent Millay’s idea that it’s okay to go out screaming and scratching and fighting. When death starts beating the door down, you need to be reaching for your shotgun.

And when you know he might be in your part of town, which is true for anyone my age, you should be taking care of business. Quit gazing out the window at the lake and start telling your stories” (p. 273).

Cash died in 2003, but I think his contributions will endure due in large measure to his faithfulness in following his vocation, and not losing his soul to this world. I am grateful.