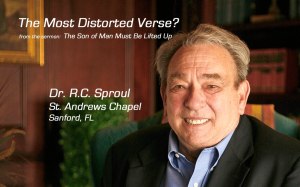 Sometimes just mentioning a man’s name makes a statement. I am not alone this week in mourning the loss of R.C. Sproul. He died just days ago near his home in FL. His ministries are manifold. They include Ligonier Ministries, sermons, lectures, teaching series, apologetics resources, CDs, and books, books, books. For me, R.C. Sproul made more than a statement. He formed and re-formed much of my thinking. Sproul’s ministry legacy will endure. Why? He was a stalwart defender and soldier of Christian orthodoxy. He had a pastor’s shepherding heart. He had a sharp theologian-philosopher’s mind. He had the sensitivity and attention to detail of a poet-writer.

When I was grappling with intellectual questions surrounding the problem of evil, R.C. did not sidestep tough questions surrounding the sovereignty of God and the existence of evil. He wrote volumes about how God is altogether holy, altogether sovereign, and how evil is obviously part of God’s decree to exalt Christ while calling all men to repent and turn to the saving gospel. Sproul did not evade tensions that thoughtful seekers asked. Through Ligonier Ministries and R.C.’s books, I discovered answers to tough questions.

Like thousands of others, my first exposure to R.C. Sproul was through his book The Holiness of God. I can still remember reading of his descriptions of Isaiah 6, and of how Isaiah learned of God’s consummate holiness. In light of God’s glory, Isaiah saw his own sinfulness, and the atoning work of God through the gospel. To read, and then later to listen, to Sproul explain the gospel by plumbing the holiness of God shook my thinking to its foundations.

After I read The Holiness of God, I went on to read and study Sproul’s other works. They are too numerous to mention all of them here, but they’re easily found. I remember reading Chosen by God and The Consequences of Ideas and Lifeviews. For me, those books were especially meaningful. Why? Because Sproul, and this is so important to me, he did not evade the thorny issues. He tackled the Bible’s teaching of predestination head- on in Chosen by God. He did not pander to keep from hurting feelings. He was, in short, faithful to God’s Word, but kind in his delivery.

In The Consequences of Ideas, Sproul walked me through the history of thought and showed how the Bible cohered where Greek ideas came up short, and/or omitted parts of universal human experience. He showed me (again) how the empiricism of Locke, Berkeley, and Hume failed to account for all the data. He showed me how Kant and Hegel fell short of answering fundamental questions and experiences. He showed me how existentialism and secularism had their philosophical feet planted in midair. In Lifeviews, Sproul tackled head-on the tendencies that many people have to settle for sentimentality, pragmatism, pluralism, and hedonism rather than the truth.

When my wife and I went to R.C.’s church in FL a few years ago to hear him in person, I was thrilled. I’d read his books for years. I had listened to him on teaching conferences. I had watched his lectures on Reformed theology and apologetics. And after his sermon, he sat on a chair in the church narthex and greeted us. My wife and I stepped up. He had breathing tubes in his nostrils. He shook our hands as I introduced us to him. True to form, he was gracious. He asked where we were from and where I’d studied during seminary years, etc. But he was a pastor, too, a gracious, faithful, gentle giant and theologian, one for whom I’m grateful. As just one more who is in your debt, R.C., thank you for your faithfulness to use what God granted you. Well done.