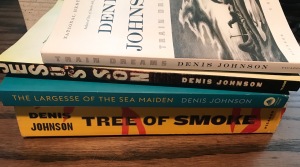 Tree of Smoke, Johnson’s long novel published in 2007, won the National Book Award. Its subjects were Vietnam, conspiracies, and myriad struggles to discern what is the “really real.” I read this novel over the last few weeks as I have worked my way through the fictional works of Johnson.

Perhaps it was because I still have an appetite for Vietnam stories. Though that was the war of my parents’ generation, in high school I read Vietnam stories and novels, and got hooked on them. Philip Caputo’s A Rumor of War and Going After Cacciato were books I was assigned to read, but I actually enjoyed those. And Tim O’Brien’s The Things They Carried, though it has been years since I have read it, still remains with me. Robert Stone’s Dog Soldiers is another fine book about the many fallouts of the whole Vietnam era from which I have benefited.

Even though I was too young at the time to have understood Vietnam when it ripped America apart, the scores of novels and memoirs I have read of that war have hopefully helped me understand a terribly divisive time in America’s history, especially with regard to issues related to war, the dangers of trusting mainstream media, drugs, feminism, secularism, and the loss of shame. The list could go on.

The late 1960s and early 1970s still shape my parents’ generation. They can recall JFK’s assassination, Watergate, and Charles Manson like I recall the Challenger explosion, the attempted assassination of Reagan, and the Islamic terrorist attacks of 9/ll.

I know that is a lot of background to explore the fiction of Denis Johnson. But context is critical. No one writes in a vacuum. Johnson’s novel Tree of Smoke was, to me at least, not his best writing. In my view, it was too long, and he lost track of his main idea. But that was the first piece of Johnson’s that I read. Its backdrop was Vietnam, the effects upon brothers and families, upon men and women with each other, and upon how people very often lose their way.

They lost belief. Does that sound banal? Perhaps. But Johnson’s characters can rip your heart out when you see them unravel existentially and flounder in trying to put themselves back together again.

Here is an example of the protagonist (Skip Sands) thinking about who he is and what he is about, about how he is to make his way in the world of Vietnam’s horrors and the pervasive lies surrounding him:

Skip regretted the role handed him at the end, that of traitor to the rebellion. At the end the colonel had sought reasons not just for an operation gone wrong, but for the breaking of his own heart, had looked for betrayal at the very center of things in the shape of some classical enormity, and what could have been more enormous, more darkly Roman, than betrayal by one’s own house, by his nephew, by his own blood? A soul too wide for the world. He’d refused to see his downfall as typical, refused all collaboration with the likes of Marcus Aurelius: “You may break your heart,” the old emperor had written, “but men will go on as before.” He’s written himself large-scale, followed raptly the saga of his own journey, chased his own myth down a maze of tunnels and into the fairyland of children’s stories and up a tree of smoke. (p.515)

But it was not in his long novel Tree of Smoke that most impressed me. It was his short stories.

The Largesse of the Sea Maiden contains amazing short fiction. Johnson, you need to know, is not a gentle writer. That is, he addresses life at its extreme moments, as if the extremes are oracles revealing mysteries not otherwise spoken.

In the short story “Strangler Bob,” (from the Sea Maiden collection of stories) for example, the first-person narrator describes his mindset while at the county jail and courthouse. Like many scenes in Johnson’s fictional world, this character is amidst addicts, rebels, dreamers, and rebels:

While I was kept there I wondered if this place was some kind of intersection for souls. I don’t know what to make of the fact that I’ve seen men many times throughout my life, repeatedly in dreams and sometimes in actuality—turning a corner on the street, gazing out the window of a passing train, or leaving a café just at the moment I glance up and recognize them, then disappearing out the door—and it makes me feel each person’s universe is really very small, no bigger than a county jail, a collection of cells in which he encounters the same fellow prisoners over and over. (p. 99)

And in his novella Train Dreams, Johnson explores the experiences of Robert Grainer, a common railroad laborer in the early 1900s in Idaho, Oregon, Washington, and Texas. Uneducated but hardworking, he marries, becomes a father, loses his wife and child in a fire, becomes a recluse, howls at the mountains with the wolves, battles insanity, a gives a dying man a drink of water from an old shoe. Yes, this is the world of Denis Johnson’s fiction, and it may shake you, too.

Lastly, my favorite Johnson stories came from his collection Jesus’ Son. This collection—again—explores lives of men and women on the edge—not just on the edge of society and laws, but on the edge of sanity. Characters hitchhike across America, find themselves in and out of hospital ERs, dives and bars, car crashes, and cabins for junkies. But they also serve as characters who illuminate the beauty in life that escapes the attention of most people.

I don’t think for a moment that Johnson would advocate for going through life on drugs or alcohol (he himself got clean after a long battle with both substances in the 1970s and into the 1980s) but in his fiction, Johnson does not shy away from using the extreme experiences—both comic and tragic—he was privy to in order to shock us into realities we would otherwise suppress. But those realities matter; they are important. They are sometimes those oracular insights—about ultimate things, and how we can know redemption is not just possible, but actual, if we will follow the signs.