Certain passages haunt. Some books are remembered for first lines or opening paragraphs. You’ve invariably heard many people quote the first line of Melville’s Moby Dick. A perennial quotable is the first paragraph of Dickens’ A Tale of Two Cities. Others often sample soliloquies from some of Shakespeare’s plays. But some novels are filled with certain passages that haunt. One cannot shake them. Why? It’s because they make the universal concrete and particular. They capture the soul’s longings. Faulkner said the best writers write about “the human heart in conflict with itself.” One of my professors from many years ago taught us that the best writers of literature dealt with the “imaginative concretization of universal themes.” Sound too sophisticated? It’s not. The bottom line is that the best writers capture what it is to be human and to wrestle with God, with one another, with death, with love and heartbreak, with friendship and loneliness, with ourselves. For me, McCarthy’s The Road exemplifies many passages that I’d rate alongside certain works of Shakespeare, Milton, and T.S. Eliot. So 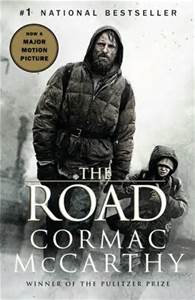 much has been written about McCarthy’s fiction, and about The Road in particular, that I’m almost loath to comment further, but as I wrote above, certain passages haunt. The question that concerns me is this: Have we followed the logic of how we answer the questions the passage raises? It’s a passage dealing with ultimate issues of God, evil, and meaning.

Here is the context: A father and son are laboring to survive. The adjective used so often to describe The Road is “postapocalyptic.” There has been some kind of catastrophe or series of catastrophes. The sky is gray. The normal means of technology are gone. The few survivors are reduced to primitive scavenging and foraging. A father and son speak cryptically about their ominous and precarious state. The son begins the conversation:

Can I ask you something?

Yes. Of course you can.

What would you do if I died?

If you died I would want to die too.

So you could be with me?

Yes. So I could be with you.

He lay listening to the water drip in the woods. Bedrock, this. The cold and the silence. The ashes of the late world carried on the bleak and temporal winds to and fro in the void. Carried forth and scattered and carried forth again. Everything uncoupled from its shoring. Unsupported in the ashen air. Sustained by a breath, trembling and brief. If only my heart were stone.

He woke before dawn and watched the gray day break. Slow and half opaque. He rose while the boy slept and pulled on his shoes and wrapped in his blanket he walked out through the trees. He descended into a gryke in the stone and there he crouched coughing and he coughed for a long time. Then he just knelt in the ashes. He raised his face to the paling day. Are you there? He whispered. Will I see you at the last? Have you a neck by which to throttle you? Have you a heart? Damn you eternally have you a soul? Oh God, he whispered. Oh God. (11-12)

No quotation marks. Just naked emotion in staccato questions and answers between a boy and his father. Do we sense the love, the sacrifice the father has for the son, and vice versa? If there were separation, it’d be better to die.

Then the father is apart from the son in the next narrative paragraph and he (the father) petitions God. I don’t see how the context could read otherwise. Observe the imagery and language. Ashes, cold, silence, opaqueness, a cycle of tragedy (Eccl. 1). Their tragic life is a breath (Job 7:7: Ps 144:4). The father almost curses and yet petitions the God he’s not sure exists. This is sublimity.

Who does this remind us of? Job. He endured unimaginable suffering (deaths of his entire family; loss of his wealth and property; flawed counsel from his friends; boils on his skin; and apparent abandonment by God). And yet.

I have read The Road several times and yet I’m reading it again. Why? Because I think McCarthy puts his finger on the problem of evil, but does not preach the answer. He leaves it to astute readers to follow the logical outflow of their worldview.

In the biblical worldview, however, the triune God (Father, Son, and Holy Spirit) sent the Son for the world. Rather than a father who petitions a (silent?) heaven for answers, history records that God sent forth his Son to seek and save the lost. Tragedy is not the necessary endgame. Tragedy can lead us to look up and see that Jacob’s ladder has been extended (Gen 28:12; Jn 1:51) and trod upon by the Son. And rather than tragedy, redemption. The road ends, in the biblical worldview, in restoration.